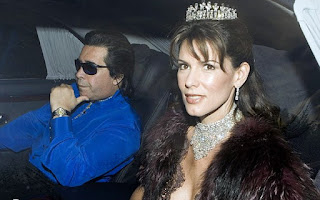 The proposal of the Saudi Walid Juffali to the former now…
husband of Christina Estrada, in order to get the divorce, ranged in the 45 million euro.
She, however, found to be insufficient, rejected it and asked me over… 236 million euros.
As he explained to the court the Estrada, a former model, have more than 66 million residential and 1.2 million. euro the time for the clothes – that is about 48.000 euro for furs, 130.000 euros for designer clothes and $ 25,000 for shoes every year.
The Estrada put on the court crying explaining for what reason are these claims: “I’m Christina Estrada. I was a top model, I’ve worked all over the world. This is the life I’ve lived, and in this I’m used to it”.
He couldn’t hold back the tears and when she mentioned a phone call he received from her teenage daughter, which, according to her, he told her it would make her “a poor girl”.
According to the lawyer of the Saudi, the personal deposits was only 26,5 million. euro while it participated in a trust that can be valued at 115 million. euro so to get 236 million. euro Estrada, the Juffali would have to take money from those intended for his daughters.
The woman said she received a phone call from her daughter while she was visiting her father in hospital of Zurich, where he’s in therapy as well as gives battle with cancer. He had told her that he has left “only a million” (pounds) and he’d buy a big house in London but because her mother wants money should now be reduced to a small house.
On the subject of housing the former supermodel explained that he could not live in their mansion in Belgravia because I was supposed to live on the same floor with the staff while another property in Chelsea and was excluded also because the bedrooms were “funny”. Questions from the lawyer of her former husband, the Estrada stressed that the residences are below the standard with which it is accustomed to living.
Among other requests, the woman asks:
-600.000 â‚¬ for five cars that the former husband had bought, three in London and two in Beverly Hills
Eur 70,000 for two “good” bags
-28.000 euro for six everyday bags and
-42.000 euro for ten purses clutch
-4.800 euro for 15 pairs of sunglasses
– two sets of ski equipment
To 54 pairs of shoes a year, of which only seven cost 25,000 euros
-31.000 euro for mobile.
The same has not claimed that he asked for a divorce in order to “stand up” for women and insisted that while the lifestyle can be considered extravagant, it was a “difficult life full of responsibilities”.
The Estrada started the divorce proceedings in Britain in 2013, citing adultery. Then the ex-husband of the divorced 2014 in Saudi Arabia.
And the battle continues…