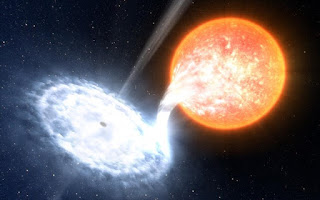 The most detailed up to today’s image for the mode of operation of a phenomenon predicted by the General Theory of Relativity, and which is very difficult to detect, emboss the study of natural from the University of Amsterdam.
The phenomenon is called Î²Î±ÏÏ…Ï„Î¿Î¼Î±Î³Î½Î·Ï„Î¹ÏƒÎ¼ÏŒÏ‚ (frame dragging), and, in accordance with this, any celestial body rotates “drift” in the same motion and space-time, ÏƒÏ…ÏƒÏ„ÏÎ­Ï†Î¿Î½Ï„Î¬Ï‚ the local.
The degree of deformation depends on the mass of the body, which is why the team from Holland has chosen to study the Î²Î±ÏÏ…Ï„Î¿Î¼Î±Î³Î½Î·Ï„Î¹ÏƒÎ¼ÏŒ in one of the most extreme versions of the. Thus, he studied how the drift of the space-time in the rotational movement a black hole of our Galaxy, which is a 28,000 light-years away from Earth.
More specifically, the scientists put in the “microscope” the disk of matter that surrounds the black hole H1743-322 and which is twisted along with the space-time. A move that leaves the “footprint” of the X-rays emitted by the disk.
According to the General Theory of Relativity, massive objects such as the Earth distorts space-time in which they are located. Therefore, for example, the planet “sink” local space-time continuum, like a heavy ball sinking rubber sheet on which it is located.
The Î²Î±ÏÏ…Ï„Î¿Î¼Î±Î³Î½Î·Ï„Î¹ÏƒÎ¼ÏŒÏ‚ refers to the case where such a body rotates, with the result that “pulls” and, therefore, twisting the space and time around it. In fact, the phenomenon has been studied for the first time experimentally in the past decade, with the measurement of the deformation by the rotation of the Earth from the data gathered by the spacecraft Gravity Probe B.
The scientists from the Netherlands wanted to study the phenomenon in a case where it manifests itself with great intensity, selecting for this purpose a celestial body with a large concentration of mass. Although in this case not being able to use data from a spacecraft that entered into orbit around the black hole, they analyzed the effect of the Î²Î±ÏÏ…Ï„Î¿Î¼Î±Î³Î½Î·Ï„Î¹ÏƒÎ¼ÏŒÏ‚ the material there is around.
The material comes from a nearby star and forms a disk surrounding the H1743-322. Using data from the hubble space telescope, XMM-Newton, the researchers examined X-rays emitted by the iron ions from the disk.
These ions emit radiation at a particular frequency, which, however, shows small variations with the change of address to their movement to an observer. So, recording how to increase and decrease the frequency over time, the group was able to “map” the movement of the ions in the disk.
In this way, the researchers found that the tray twisting, following the local deformation of the Ï‡Ï‰ÏÏŒÏ‡ÏÎ¿Î½Î¿Ï…. In fact, the closest to the black hole areas of the disk, the intensity of the phenomenon is 100 trillion times greater than the Î²Î±ÏÏ…Ï„Î¿Î¼Î±Î³Î½Î·Ï„Î¹ÏƒÎ¼ÏŒ that causes the Earth.
In accordance with the Dutch physicists, the research also shows that the irradiation of iron ions is a “footprint” that can give important clues about what’s going on in the “neighborhood” body like H1743-322. Thus, it gives the possibility to study even better the black holes.