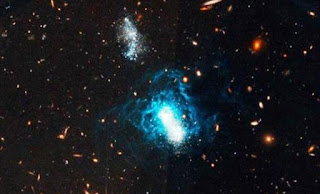 Called ASASSN-15lh, is located at a distance of 3.8 billion. light-years from us… it Is a supernova, a star destroyed in a supernova explosion, and was spotted last June.
A team of scientists led by Subo Dong of the Institute of Astronomy and Astrophysics Kavli, University of Peking in Beijing publish in the journal “Science” the findings of the study that they did in ASASSN-15lh.
It is the brightest supernova in the Universe since, according to the researchers, the brilliance of it’s 570 billion. times greater than that of the Sun or 20 billion. times more brilliant than all the approximately 100 billion. stars in the our galaxy!
The explosion of ASASSN-15lh release 200 times more energy than they release, usually the supernova explosions.
Experts speculate that such an explosion probably has come from the self-destruction of giant stars, stars with a mass multiple of that of the largest stars that we know of in today’s Universe.