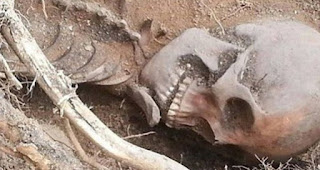 In front of the…
a macabre discovery was found at noon Sunday, a the sea, that you went for a walk with his dog in the coastal area in Kokkini Hani, Heraklion.
The dog is playing, all of a sudden he began to dig, revealing a human skull. Immediately the dog’s owner to inform the authorities and the police went to the spot, revealed a human skeleton.
According to initial estimates, this is a man who was buried there before about 20 years.
According to information, the authorities shall consider two possibilities.
Whether it is the victim of a crime who was buried there, or someone who drowned, and after he washed ashore, his body swallowed up by the dirt.
The first stage is to await the results of forensic examination, while I raised and all the cases of statements for people who had gone missing in the past.