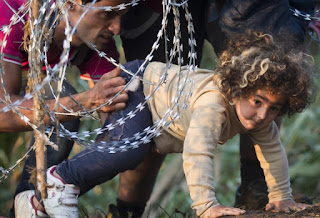 “A lesson for the EU” is the title of the story…
published in the electronic page of the Spiegel and refers to the temporary closure of the border between Greece and FYROM.
In the article it is noted: “Temporary or not the closure gave a foretaste for the following scenario: what would happen if the EU carried out its threats of and away from the Schengen area Greece?”
According to Deutsche Welle, Spiegel reports: “the closure of The border for ten hours led to a crowding: 1.200 refugees, among them children, the elderly, and patients were stuck in a gas station in Eidomeni. Others 1,200 in a refugee camp on the border, The refugees there have to rely on themselves, without support from humanitarian organizations such as Doctors without Borders or Save the Children”.
The Welt of Berlin from the side notes: “The fact that Greece is the one who has to take care of the most important external borders is fatal. The debt-laden and financially-strapped country fails daily to carry out this enormous task.
The country-member of the EU after so many years of economic crisis is considered to be a failed state with inadequate management, customer economy and a lack of social infrastructure. And the rift in the european external borders seems to be deepening. From the beginning of the year, despite the winter weather, the number of refugees has increased by a lot, even once. None of the refugees wants to stay longer than necessary in the Greek territory. The treatment is considered undignified, even though Brussels is providing financial assistance”.
Source