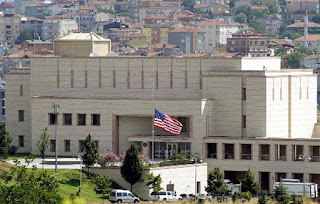 The consulate general of the united states…
in Istanbul run today, as it was closed most of the services of the following information for “potential threat”, as announced by the diplomatic delegation.
“Following information regarding a possible threat at the U.S. consulate general, the consulate will work today with limited staff and services”, said in a statement that posted yesterday on the internet.
The “non-urgent” appointment which relate to, for example, applications for visa “cancelled and will be set at a later date,” reads the statement which clarifies that the other american diplomatic missions in Turkey are functioning normally.
A large security service, consisting of american soldiers and Turkish police, is parked outside the building of the consulate, according to images broadcast by the Turkish television network NTV.
The american authorities had on Saturday for “imminent threat” against its consulate in the Turkish city.
The representative of the State Department John Kirby said last night that he has additional information on the nature of the threat and called on the citizens to avoid the area”.
The ultra-left organization Revolutionary People’s Liberation Party-Front (DHKP-C) had taken over responsibility in August for the attack on the american consulate in Istanbul in which there were no victims.
The Turkish authorities maintain a high level of the alarm for a terrorist threat after the attack in Ankara on 10 October, with 103 deaths, which they attributed to the jihadists of the organization Islamic State.
Source