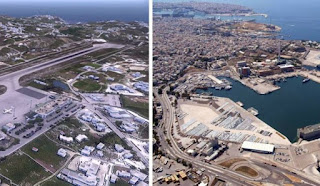 Sold the “silver” of Greece as it is…
furnished by the left-wing government when he was opposition protesting the selling off of public property. So after the sale of 14 regional airports in the German Fraport which in the Î»ÎµÎ³Î¼ÏŒÎ¼ÎµÎ½Î¬ of signed up with… a lot of tears, comes the turn of privatization for the ports in the country as privatisation of the Greek DESFA and the Astir Vouliagmenis hotel.
This heralded the head of the FUND Stergios Î Î¹Ï„ÏƒÎ¹ÏŒÏÎ»Î±Ï‚ claiming that the government is proceeding “in a decisive manner” on privatisations, saying that the announced election and therefore got the approval of the Greek people!
Estimated that altogether-including the airports – revenue will close in 2016, 3 billion. euro on the funds of the State, an amount of funny for the real value of “silver” and the future revenue that will bring in the buyers.
Speaking at a television station, mr. Î Î¹Ï„ÏƒÎ¹ÏŒÏÎ»Î±Ï‚ announced that after the closing of the agreement for the airports following the completion of the process for the port of Piraeus and that of Thessaloniki. Of course, we assume that these signatures will be done with… tears and heartache Behold the timing of the immediately subsequent months for the “use” of public property as described:
For the PPA: to be deposited with offers until 21 December For the port of salonica: THE process will be completed in April. For the PIPELINE: it is Expected that the corresponding completion of the Î±Ï€Î¿ÎºÏÎ±Ï„Î¹ÎºÎ¿Ï€Î¿Î¯Î·ÏƒÎ®Ï‚. For the Astir palace resort: The “next few days” will be announced the agreement with the investors. As stated, this auction was completed in the past, submitted a plan to the Coe, which, however, was rejected and no longer is fit to the data of such a decision in consultation with the investors, so that with the same price to occur customized design.
For the Greek: Starts the debate for the improvement of the project. The LAMBDA has secured financing from Dubai and China. There will be a final agreement for implementation in the first months of 2016. He argued that in this process you will take an active part, and the municipalities of the region. Finally, the first time the Left has amazing similarities with the previous political past of the country.
Source