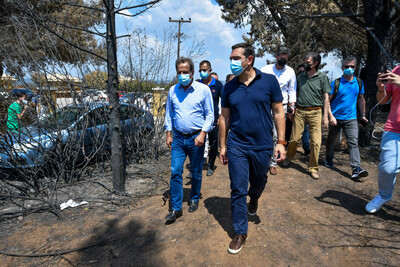 The complaints that the aerial means of firefighting did not come, as a result of which the fire escaped in Ilia, were repeated by representatives of the Local Government to the president of SYRIZA, Alexis Tsipras.

At the same time, the head of the Olympia community complained that the fire could have been extinguished in the beginning if they had intervened immediately by the fire brigade.

In the same wavelength with other bodies of the local self-government, Mr. Stasinopoulos stressed that “everything that was saved was saved by the residents with the water tanks of the municipality”, while in his turn he complained that the fire trucks came later, while the air means came when the fire had already entered the village “.

The government should not make a communication policy in the burned areas, Alexis Tsipras argued and noted that all the burden from September should fall on the effort on how to secure the income of the fire victims and how the people will stay in the burned countryside.