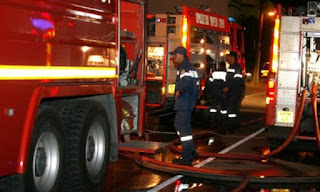 A fire that broke out at random from a mechanical failure completely destroyed a lorry that was moving last night to the highway Limassol â€“ Larnaca, despite the Alethriko. The value of the damage is estimated to reach ten thousand euros. According to the Police a little before eight last night, while a 55-year-old from Limassol was driving on the motorway with direction Kofinou to Larnaca, articulated vehicle and drew back, a little after the exit Î‘Î»ÎµÎ¸ÏÎ¹ÎºÎ¿Ï, at some point, watch out smoke from the front left side of the truck. Immediately the vehicle stopped on the security strip of the motorway and shortly after exploded in fire at the front of the truck. From the fire the front of the truck was completely destroyed while damage was suffered and the wagon which was loaded with goods to well known supermarket (Lidl). The scene was visited by men of the Police Station Kofinou and Aradippou and ÎŸÎ ÎŸÎ›Î  Headquarters, who cut off and the two lanes of the motorway for almost two hours. The fire in the truck has been extinguished in full by members of the Fire Service who responded with three cars, a little before nine in the evening. From the fire there has not been any injury, while investigations by the Police found that the fire was due to mechanical failure and was excluded in the criminal action. There is no insurance coverage for fire in the truck, however, there is a safety for the goods carried. The value of the damage to the truck is estimated around ten thousand euros is still unknown up to now, the value of the damage to the goods.
Source