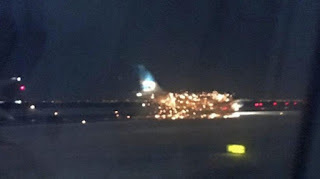 Commotion prevailed…
at JFK airport in New York when a fire broke out in the engine of an aircraft of Argentina AirlinesÏ„Î·Î½ time that he was about to take off with destination to Buenos Aires.
The pilot of the flight 1301 mentioned in the event of a small fire in the engine although the rescue teams who arrived on the scene found no hearth.
The aircraft, according to Reuters, he returned to the point of parking the without to be no injury. This is a Airbus A330-200 which was due to take off at 9:54 in the evening, local time.