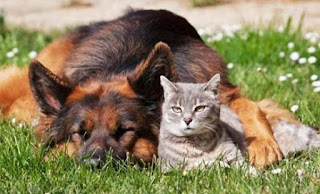 For the eternal cat lovers around the world, this will be a…
disappointing new: our friends the cats, they don’t care and especially for us as the dogs.
In the context of the BBC documentary, “Cats v. Dogs” who are the experts in the veterinary field, Chris Packham and Liz Bonnin, hosted a Î½ÎµÏ…ÏÎ¿ÎµÏ€Î¹ÏƒÏ„Î®Î¼Î¿Î½Î± who examined which of our favourite pets are likely to love us more.
Scientists already know that dogs – like humans – they release oxytocin, also known as the “hormone of love”, when they are in contact with their owners. “We have sufficient evidence that the dogs actually love their humans,” says Dr. Paul Zak who conducted the study. “A few similar studies have shown that when the owners interact with their dogs, both humans and their dogs release oxytocin”
Dr. Zak compared the amount of “love hormone”, which produce both the cats and the dogs each time they played with their owners. He took saliva samples from 10 cats and as many dogs in a couple of cases – one 10 minutes before the time of the game with their bosses, and the second immediately after.
The results showed that the hormone increased, in average, by 57,2% in dogs and only 12% to cats – which means that, theoretically, the dogs, love their owners five times more than what cats do.