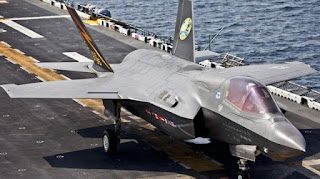 Two fighter aircrafts F-35, landed for the first time in Australia in the course of the night, in the context of…
the preparation for the formal reception, which will take place in the context of an air show ( Avalon Airshow) in Victoria, later in the week.
The F-35 has been the focus of widespread criticism from military personnel, and politicians in recent years, as the program for the development of the complete fighter 5th generation, has been saddled with delays, but also an excessive increase in the economic costs, from the initial communication, 2001.
The fighters landed at air force base (Amberley Air Force Base) that is located outside of Brisbane, late last night, and it is expected that they will fly to Victoria, where it will be the air show, from Friday.
Australia has committed to purchasing at least 72 fighter F-35, despite the doubts for the future further development of the JSF, as well as the maker company Lockheed Martin has been the focus of criticism from the president of the united states, Donald Trump, on the occasion of the high financial cost of development of the fighter.