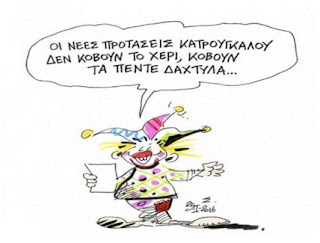 And suddenly mr. Katrougalos seems willing to go to improvements in the draft for Insurance…
And the question arises: was it necessary to be off the charts, to perceive mr Katrougalos that there are upgradeable points? â€“ because it didn’t involve these “improvements” to the draft straight in the first place? This is a reasonable question, and reasonable questions are not appropriate to be released at this time.
A second -logical – question is whether the improvements are satisfactory â€“ but I will reply to those interested. And thirdly, no question, but fact is, that all of them are treated Î¶Î±Ï„ÏÎ¯ÎºÎ¹Î¿Î½ in th Ï€Î±Î¹ÎºÏ„Î¿Î¯Ï‚. “In Rome we will take the decisions”, the Berlin will decide who lives and who dies, with the new Insurance (and working, the red loans, fiscal policy, privatization) â€“ and all those things which you spoke with took pride mr Tsipras during the inauguration of a year of government SYRIZA â€“ ANEL.
The head of the Left get on your knees he spoke and he was talking about not to say anything: for the ENFIA not abolished, for the wage is not raised to 751 euros, for the 13th pension is not restored â€“ it was just sour grapes, you might say. New evils more grim and boiling have come, but neither of these spoke mr Tsipras, probably not to spoil the festive mood of celebration, as expressed by the ms. Tzakri ÏƒÎºÎ»Î·ÏÎ¯Î¶Î¿Î½Ï„Î±Ï‚ like a happy little cheerleader hip-hip and Î¿Ï…ÏÎ¬Î¬Î¬ every time you hear the word Left.
It was a modest celebration, which was attended and welcomed our fraternal parties, such as the COSCO, Fraport, the siemens constructed, and the presence of enthusiastic crowd is not referred so much to the left, as in little league PASOK. And when I say crowd, if you add in the kin of mr Shina-Papadopoulos, we mean a multitude. And with great passion, used to beat mr. Schaeuble, the tabors, while they danced in rhythm the red flags at half-mast for the absence of mr Stournaras (man was charged to guard the Mint). Personally I was moved remembering the euphoria of the people for the victory of SYRIZA in January of last year, which soon turned into irs, headed by the Trifon â€“ keeping score: the esti rich? one and one make three, plus eight equals sixty-five!
As he took the “no” in the referendum, 65%! As he also pays taxes and contributions, a millionaire who makes an average of 18,000 per year â€“ or a farmer, or a lawyer, as long as it’s not a hack of gambling â€“ they don’t pay anything. Indeed, it was a nice celebration and all the more admirable was the courage of mr Tsipras is lying to you. I don’t know about you, but me, myself when I lie to your face ÎºÎ»Î¿Î½Î¯Î¶Î¿Î¼Î±Î¹.
I heard mr Tsipras and I was thinking that maybe I will not lose my home, that in three months will see you again the life with optimistic spirit, it’ll be gone the Germans, and with them would have been good riddance to bad rubbish the collective redundancies, that he stay in the fourth reich bottle of the fourth memorandum in the hand! Oh, yes! it is true, when mr Tsipras would lie to my face, my own duty in Germany is sustainable, while the debt of Germany towards me (and the Î±Î´Î¹ÏŒÏÎ¹ÏƒÏ„Î¿ my family) vanishes. Big deal, the truth, comrades. The truth is a revolutionary Lenin said, the true is a national said, the Salmon, the truth is that we say, and no conversation to pass the time, says mr. Tsipras.
Therefore a big right, when it asks the Right: “who is it? with the roadblocks, or the IMF?”. No! With the roadblocks, is SYRIZA and the IMF the Right. This is the regularity! For this too I’m protesting the roadblocks to support the negotiations of the government with the roadblocks. Which support the government’s negotiations with the IMF. So simple, and I don’t know what you don’t understand, fools. Of course, ÎµÎ¾Î·Î³Î¿ÏÎ¼ÎµÎ¸Î±! when I say “fools”, I don’t want to offend you.
I want to upgrade, such as upgraded Greece by Standard and Poor’s: from Î·Î¼Î¹ÎºÎ±Ï„ÎµÏƒÏ„ÏÎ±Î¼Î¼Î­Î½Î· in Î¼Î¹ÏƒÎ¿ÎºÎ±Ï„ÎµÏƒÏ„ÏÎ±Î¼Î¼Î­Î½Î·. Is not this a success? Not fair well to mr Tsipras, when he wants to rip the third memorandum, to enter the quarter?.. Anyway, the only problem that I have when I’m trying to hide behind my finger is that the Troika cuts off one of his fingers.