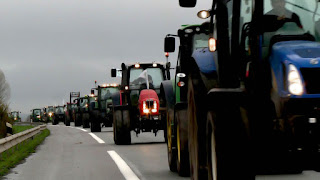 Writes Nikos ÎÏ…Ï†Î¿ÏÎ´Î·Ï‚
I promised myself that I will never forget the experience of the route Athens-Thessaloniki…
About 11 hours driving. Through Elassona. Athens-Thessaloniki via Elassona, I repeat! They had closed the Tempi, because of the farmers you see. Fortunately, we got out alive after that torturous journey. We never think about in this country, the collateral damage, you see. We don’t care. The absolute Ï€Î±ÏÏ„Î¬ÎºÎ¹Î´ÎµÏ‚.
If the other is suffering, in pain, hungry, happy, sorry, I just don’t care. For this and for many decades our criticism to the Ruler, local or national, to stop the time of appointment. Of our own, a child, brother, or any other person concerned came time to pass the gates of the Public. That’s who we are I wonder? So ÏÎ±Î³Î¹Î¬Î´ÎµÏ‚ it? Any pride?. That is the question. That won’t be answered and easily.
Watch me goosebumps to be viral on the Internet a chicken -very nice in the other – and to be defiled in this way, the Mansion, which is not associated with the prime minister, but with the image of our country abroad. To compare it with the entrance to 10 Downing street, which attracts many tourists for souvenir photos? And, obviously, our own the Maximos Mansion and the Herodes Atticus is much more beautiful creations from its british counterparts.
I have to disagree, well, with all those who rejoice for the entrance of the tractor in Thessaloniki, greece. With the siege of the Minister in Komotini. With the beating of Hadjidakis older (by those who implement the memoranda, please).
As fair or unjust their demands, even if it is worth the Î£Ï…ÏÎ¹Î¶Î±Î¯Î¿Ï…Ï‚ rulers, because they open the floodgates for so many years now, the way he protests that he doesn’t respect the fellow worker, the inhabitant of the city, the visitor will never be likeable.
Can and there are other ways of protest. We need to put an end to the double ÏƒÏ„Î¬Î½Ï„Î±ÏÏ„Î½Ï„Ï‚ we have. An immoral man will be the same whether it’s left or right. Our country will be like Greece, whoever is the prime minister. I hated always Î¿Ï€Î±Î´Î¿Ï€Î¿Î¯Î·ÏƒÎ· in the political life of the country.
Sobriety and prudence that we need to show everyone these days do not allow you to delighted even with the hostage of the Minister of SYRIZA but either with the dissolution of the tissue of the cities on the pretext of the rights of a social group. Whatever it may be. Or hard-working farmers or hard-working members.