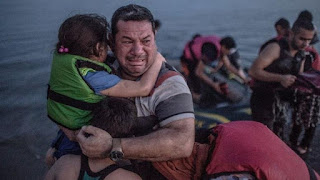 More than 2.5 million. migrants waiting on the coast of Turkey to cross to the European Union…
The dealers found most of the other hallway , the “passage” from Libya to Italy, through Southern Greece .From eavesdropping it became known that the drug dealers have moved on and organize to “offer” even two sailings a week, while one speaks of transfer of even 200 people with a boat with a supply of food and water along the way , as a gift
The new route to a destination in Italy , not under the original agreement , substantially cancels , and so the Turkey will SEEK a NEW DEAL …. Mr Kotzias
Expected to ” hit ” Crete and the surrounding islands after the 27th of June by a new wave of migrants â€“refugees . Arabs and Africans mainly .
Don’t ÏƒÏ„ÏÎ¿Ï…Î¸Î¿ÎºÎ±Î¼Î·Î»Î¯Î¶ÎµÏ„Îµ, therefore, in Crete , Prepare two Centers hosting refugees , already , caught in his sleep
From the beginning we had the feeling that the agreement of 19 March is a precarious and difficult to apply “setting”, from which Turkey was paid “generously” having essentially blackmail Europe … he got what he really wanted, and now “playing it back” the project to another stage .
Thus , it remains unclear the fate of about 55,000 ( officially registered ) migrants and refugees who came to Greece before the 20 ÎœÎ±ÏÏ„Î¯Î¿
Has received a Turkey all the necessary measures to prevent the opening of new maritime and land corridors for illegal immigration into the EU? … NO
It has enabled the Voluntary Plan for Humanitarian Entry (resettlement), in which the countries of the EU will participate on a voluntary basis? … NO
The EU and Turkey have cooperated for the improvement of the “humanitarian conditions” in Syria is? …NO
The Syrian Observatory for Human Rights reports that , since 2011, so began the civil war in the country have lost their lives, more than 240 thousand people and the refugees touch the 4 million. souls. Among the victims is 12 thousand children….
What are we waiting for? To be in the same project viewers? or to prepare the ground in order to , in return, again , to achieve a new evaluation?
TEAM HIGH Î‘Î£Î¤Î¥ÎÎŸÎœÎ•Î¥Î£Î—Î£