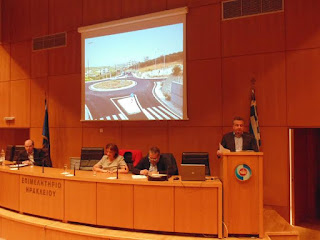 The claiming of resources amounting to eur 1.5 billion for projects in Crete for the new Programming Period of the… next five years will be sought by the Region of Crete, implementing a development plan in cooperation with municipalities, and services that will bring jobs, and improve the quality of life of the inhabitants of the island. This stressed the regional Governor of Crete Stavros Arnaoutakis in the context of a workshop entitled “Presentation of new calls of the Operational Programme “Crete 2014-2020” organized by the Region of Crete with the managing authority at the Chamber of Heraklion.
The Governor referring to the ROP of Crete, which is completed on 31 December 2015 pointed out that “we’re closing with the success of the Programme in the period 2007-2013 with a budget of 480 million. euro and the implementation of 500 projects all over the island. We start with optimism the new Period there are funds from the Regional Programme of 460 ec. euro but our goal is to reclaim resources of 1.5 billion euros in Crete for the next five years”
At the same time, Stavros Arnaoutakis, thanked all the services of the Region, the Managing Authority and the stakeholders who have implemented this important program. “We also seek the cooperation, assistance of mayors for the new Programming Period changing “philosophy” of implementation. Only with the cooperation of all of us, we can achieve the target that will give growth, employment, social cohesion, the improvement of living standards,” stressed the Governor, and added: “This year we are closing with payments of $ 100 million. euros from the ESPA. It is particularly important that the amount if we consider for how long there were no payments, they had stopped a lot of contractors to work with the pressure , urging that the money will be given, and with the assurance of the Minister, mr. Stathakis, the situation Î¿Î¼Î±Î»Î¿Ï€Î¿Î¹Î®Î¸Î·ÎºÎµ”.
For the implementation of the new Programming Period, the Regional director stressed that “the studies must be quality, they need projects that will give employment. Also, the new Season will find us ne we have invested in the road network of Crete with auctions of works of 2016, over 100 million. euro, which will improve road safety, while we are finalizing all of the biological and sewage networks, we proceed to interventions in schools, kindergartens, health etc.”.
From the side of the Head of the special management service of the operational programme of Crete 2014-2020 Maria ÎšÎ±ÏƒÏ‰Ï„Î¬ÎºÎ· reported that “the outgoing Programming Period is closed with a complete success because our program has completed almost all of the projects despite the problems, the difficulties of our projects are in very, very good progress so it will not burden the national economy with rest, and we will have completed a very important intervention in Crete” and added: “The new season starts with the first invitations which we issued, it is a program that differs from the past. The emphasis as we have said, in entrepreneurship, in innovation, and in the social sectors, due to the funding we have from the European Social Fund. Today we inform all stakeholders in order to provide timely, quality and correct sentences. Because the quality and the effectiveness that characterises the new Programming Period”.
In today’s conference was attended by Î‘Î½Ï„Î¹Ï€ÎµÏÎ¹Ï†ÎµÏÎµÎ¹Î¬ÏÏ‡ÎµÏ‚, the President of the Regional Council, mayors, representatives, mayors, managers of services, and they had invited all the actors who have the competence to plan and submit proposals to implement then.