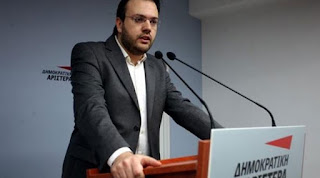 The President of the Democratic Left and the Parliamentary Spokesman of the Democratic Î£Ï…Î¼Ï€Î±ÏÎ¬Ï„Î±Î¾Î·Ï‚ Thanasis Î˜ÎµÎ¿Ï‡Î±ÏÏŒÏ€Î¿Ï…Î»Î¿Ï‚ talking on the r/p-CHANNEL and the journalist Pavlos Tsimas, among others, has pointed out:
Parliamentary procedure: We have the government of the urgency
Once again, we are legislating with urgency, it has come to the government is the government of the urgency, while the last placement of the mr Î¤ÏƒÎ±ÎºÎ±Î»ÏŽÏ„Î¿Ï… it doesn’t confirm the urgency, not even for the dose of 1 billion euros. I confirmed the need for urgency and of many articles coming and I don’t have a relationship with the prerequisites. Therefore for what reason these articles come into this process? This tactic is done every time. It is important issue for the parliamentary system in our country.
For the settings for the red loans: Affected social cohesion
The substance of the bill we have a central disagreement in the management of non-performing loans. We disagree with the setting for the red loans which are sold to private foreign funds. Why don’t we explain why these cases could not manage the banks? They enter companies with a limit of capital of 100,000 euro, which will be able to purchase business loans of millions of euros? Is it possible? The bill that affected the social cohesion, and once again the healthy entrepreneurship and the small and medium-sized entrepreneurs. We will vote against it on the principle of the particular bill.
For the payroll of the government: it Raises serious questions
On the payroll of the public, there are specific problems. The budget provided for savings of 2.7 million euros and now there is an additional cost of 150 million euro, which goes to the medium-term. It is a redistribution of the wage bill, which raises questions on many issues when the discussion is done in a day not all of them can be shown.
Tomorrow’s event of the Democratic Î£Ï…Î¼Ï€Î±ÏÎ¬Ï„Î±Î¾Î·Ï‚: Strong progressive pole in order not to steer the world in a populist voices.
Tomorrow at 18.30 we have the great concentration in the field of Î£Ï€ÏŒÏÏ„Î¹Î³Îº. We lead the programming debate, in view of the programming conference of the Democratic Î£Ï…Î¼Ï€Î±ÏÎ¬Ï„Î±Î¾Î·Ï‚ PASOK-DIMAR-Citizens ‘ Movements in the spring. We open the programme dialogue with society. We could do it in closed offices, but we don’t want that. We want to open ourselves up to society, to talk with the world and to present our plan for the next day. I predict that in 2016 there will be a broad rearrangement of the political system. See what’s going on in all the parties. Therefore the world should not be directed at extreme populist voices and populist parties. We have to strengthen the progressive pole with the Democratic Coalition that we have to become the one of the two important pillars of the political system as the social-democratic parties in Europe. This is our strategic goal.