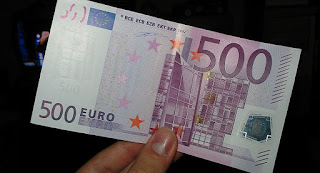 The European Central Bank (ECB) wants data…
to suggest that the high value banknotes, such as 500 euro, facilitate criminal activities, said the member of the executive council, Yves ÎœÎµÏÏ‚, as the central bank is considering a change of policy with regard to their adoption. “There are politicians who have views on this subject, and also in the G -20. I would be very happy, if given some evidence to the ECB,” said ÎœÎµÏÏ‚ to journalists in Zurich, according to a report the agency Bloomberg.
In the discussions we have with european officials who are entrusted with the implementation of the laws, “it’s always the same,” said the ÎœÎµÏÏ‚, adding: “We say: These are allegations. We would like to see them be confirmed by evidence, so we could take the appropriate measures”. It was preceded by the statement of the president of the ECB, Mario Draghi, last Monday in the European Parliament that the ECB shall review the policies for the issuance of 500ÎµÏ…ÏÏ‰Î½.
British officials believed that they had sufficient evidence before some years. In 2010, british banks and currency exchange offices have stopped granting 500ÎµÏ…ÏÏ‰Î½, after a report that showed that 90% of the demand for these notes came from criminals. A study of the Bank of Italy the previous year described how people in the Mafia, that they laundered black money, terrorists, and tax evaders gathered these notes, because it is easy to Î±Ï€Î¿ÎºÏÏ…Ï†Ï„Î¿ÏÎ½ and transferred.
The House, which was at that time governor of the Bank of Italy, said Monday that the Governing Council of the ECB considers this issue “for some time” and that there is an ongoing technical work to consider the issuance of such notes. The statements were made one day before the announcement by the European Commission’s action plan for combating the financing of terrorists.
“There are questions about the best application of a decision and how will you serve this,” said Draghi in the European Parliament, adding: “we Want to make changes, but we want to do it in a structured way. But you can be assured that we are determined not to make things easy for the criminals to have profit from the issuance of notes”.
Source