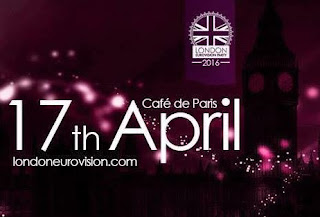 Read the announcement: “For the 8th consecutive year, the city of London hosts a big Eurovision party in the… which each year,involved many artists -among them up to now and the Greece, and present it in a great celebration before the auction to the public of their songs for those artists attend.
Our country and each representative of,they tend to give the present in this event as we update the INFE Greece ,while characteristic is the presence in the last few years among various guests who take part (Conchita,Danna International, etc.) and the “own”to our Sarbel -representative of Greece 2007â€“that has revolutionized the successes of the audience that is there.
In the “Cafe de Paris” in London’s West End hit and this year the heart of the party of the 61st Eurovision on 17 April.
The event will present the Nicki French (Representative UK 2000) and the presenter of the BBC’s Paddy o’connell,while the dj Dave Simmons will be playing eurovisionoÏ„ÏÎ¬Î³Î¿Ï…Î´Î±.
The countries that will be present will be announced soon since the list is constantly updated.
Let’s remember our last representative Maria Elena Kyriakou in features snapshots to interpret the winning of the Greece song of 2005 My Number One to the public.”