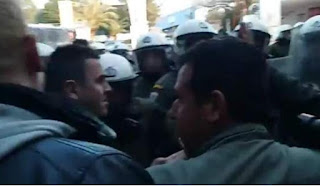 Episodes occurred between the farmers and the forces of the riot police broke out in Thessaloniki, greece…
A little after 16:00 on Thursday afternoon farmers that had arrived in the space of the exhibition attempted to break the police cordon, they crossed the police cordon and arrived at the entrance of the International fair of Thessaloniki.
More specifically, the south gate of the International Exhibition of Thessaloniki, where is hosted the exhibition Zootechnia, the blinds of the south gate was closed. This infuriated the farmers, with the result that the open and invade in the Report, however, met the barrier of the Police and there have been broils and scuffles.
The farmers claim that the report is for them and must allow them to enter.
Be noted that the opening of the Zootechnia will be made by the minister for Rural Development Vangelis Apostolou.

In the centre of the city, in accordance with the seleo.gr are a total of 25 tractors.
In the square YMCA are among other farmers from Thessaloniki, Larissa, Karditsa, Drama, Serres, Katerini, Xanthi, Orestiada, Kavala.
Because of the mobilisation has caused a traffic jam in the centre of the city. Traffic police are on foot for the facilitation of the movement of the vehicle.
The tractor will remain on the side of the road as evidence of protest in the context of the inauguration of Zootechnia will be held on 19:00.