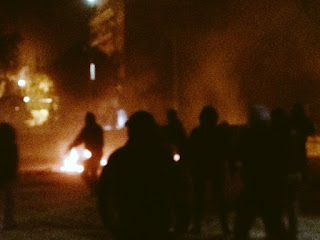 Episodes occurred on the evening of Sunday in front of the old building of the Legal…
School of the Democritus University of Thrace, in Komotini.
A group of demonstrators clashed with police forces during planned events for the completion of 7 years since the murder of Alexis Î“ÏÎ·Î³Î¿ÏÏŒÏ€Î¿Ï…Î»Î¿Ï….
During the course of the rioting the protesters, from the anti authoritarian space according to the information, hurled molotov cocktails and the Police responded with chemicals. In parallel, set fire to trash bins, while engaged in a rock fight for the part of the Police.