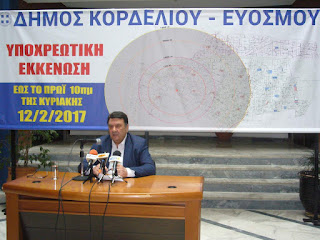 â€œThe evacuation of the population from the risk zone, it is mandatory not to foster the work of the army, the hellenic police or municipal authority. Is made for the safety of citizens,â€ stressed the mayor of the municipality of Evosmos – Kordelio, Peter, Booby, during a press conference on which has informed on the latest details of the plan to disable the bomb of the second World War in Kordelio.
The mayor of Kordelio – Evosmos urged everyone to remove themselves from the radius of the hazard of 1,900 meters, which has been designated by the army on the basis of data of the type of bomb and its power.
â€œWe want a city permit to protect the lives of citizens,â€ he stressed.
Stated that as of today began from the AMBULANCE and through the Municipality to the transfer of persons with disabilities or persons with health problems or with the elders in hospitals (424, Gennimata, Smear, Agios Dimitrios), or other hosting structures and that the Municipality had hired a hotel for the free hosting people who have to remain bedridden and their escorts.
Mr. Booby said that the phones in the municipality accepted until today to 3,500 calls to 10 phone lines and that the whole undertaking has cost the municipality roughly â‚¬ 9,500.
â€œThis is the largest population movement that needs to be done in the country, within three hours from 7 to 10 in the morning. It can be daunting. As well it’s such a project to succeed requires the cooperation of the citizensâ€ he stressed.
Called on the people to follow faithfully the instructions of the military and police authorities in order to safely transport tomorrow morning, with buses available to the OASTH from the points of concentration at points of hospitality.
As explained in the assembly points, there will be voluntary groups, the police and officials of the municipality, to be done with class, the boarding of the buses. At the same time carried out normally routes OASTH until 9 in the morning for anyone who wants to be moved.
The company to disable the bomb will start at 10 in the morning and the “alarm” is set to expire in six to eight hours, when I removed the bomb from the urban fabric.
The town hall of the municipality of Evosmos – Kordelio is inside the risk zone, but the municipal authority and the Greek police will be there, may not work elsewhere, the Centre Company of the municipality of Evosmos Kordeliou, said mr. Booby. Stated that the central information for the three municipalities of the region (Municipality of Evosmos – Kordelio, a Municipality of Ambelokipoi – Menemeni municipality and the Municipality of Delta) will be made by the Operations Centre of the Region of Central Macedonia, where there will be a representative of the municipality of Evosmos – Kordelio.
Citizens were informed adequately by the MEDIA, in every apartment building was welded to a poster, which informs you that needs to be removed and shared door – to-door brochure for the points of concentration, from which depart the buses of the OASTH, mr Booby.
Sound messages sound throughout the municipality constantly and continues the briefing by the call centre, which employs 40 employees of the municipality.
Mr. Booby said that the fortunes of the citizens will be protected by the police, as well as a 1,000 policemen will be patrolling in the risk zone and that is sufficient storage from EL.NES. in the area where the bomb is located.
The supply of natural gas will be stopped in a short distance (approximately 300.) around the area where the bomb is located, as well as the electrification and from the OSE announced that it will stop the passage of trains.
The mayor of the municipality of Evosmos – Kordelio, said that it is a positive fact that there is no panic and the world is facing with a sense of humor to the undertaking.
Source: “Daily”