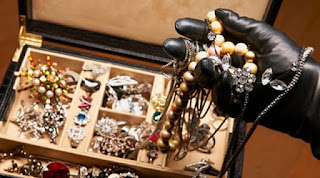 The jewelry store which is located on the road Daglis, a few meters from the Central Square of Xanthi, emptied the morning of Wednesday, unknown so far, shooters.
The perpetrators shortly after 4: 30 in the morning according to the up to now data using their vehicle (probability of a type of truck) ripped out the roll of security of the store and entered into this by removing various jewels and jewellery from the showcase, but also their interiors. Then fled while the incident was the Police which is conducting investigations to identify and arrest the perpetrators.
Security men Xanthi in the framework of the inquiry went to the store for the fingerprinting and data collection by the jewelry store space, while the owners of the store may not even believe what has happened.
It is worth noting that the jewelry store is located just a few meters from the Central Square of the city and opposite the Officers ‘ Club, a fact that demonstrates the audacity of the perpetrators who moved in a flash. The corresponding break-in had been made and a few years ago at a jewelry store in the area of E. Tsaldari, where once again the perpetrators were â€œpick upâ€ the protective roll of the store’s security.
The investigations of the Authorities is in full swing.
Source