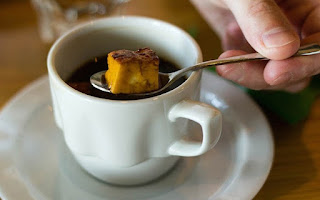 Coffee is one of the most favorite beverages worldwide, and the… last few years, the “art” of coffee has become a science, with companies making more and more new products.
Below you will find 8 of the most bizarre of coffee drinks from all over the world with some of them to foreign enough.
1. Coffee with… the egg! The egg yolk and condensed milk whipped together until it becomes thick and creamy the result. Then the black vietnamese potbellied coffee is poured from the top and sinking to the bottom. It is said that the taste is like a silky cream coffee.
2. Coffee with sea salt The “chef” in the well-known coffee chain 85C Bakery Cafe in Taiwan, they served coffee with sea salt for the first time in December 2008 and became… a best seller! According to a representative of the company arose as a result of inspiration from the custom in Taiwan to sprinkle it with salt, fruits such as pineapple and watermelon to show off the sweetness. This convinced the company to try it with coffee.
3. Coffee and tonic Can the tonic and the coffee sound like a strange combination, but this match has grown in popularity in the world for those looking for something a little different from an ordinary cup of coffee or espresso. It is so simple to create as well as just a cup of espresso poured into a glass with tonic and ice.
4. Coffee with butter and oil The Bulletproof Coffee is the company behind this combination, and claims that drinking this beverage is like taking the entire breakfast. It even claims that butter in coffee -when the recipe is done right it gives a little more power to the person who consumes it.
5. Coffee with cheese To Kaffeost is a result of Swedish tradition, according to oddee, (in Finnish) and going for coffee with immersed inside a piece of cheese known as LeipÃ¤juusto, which one finds mainly in Finland, and it’s made from the milk of cows, goats or reindeer.
6. Coffee with lemon or lime May in Greece we are accustomed to drinking coffee with lemon only in specific cases, but in other countries they drink a cup of coffee, hot or cold, served to those who want their coffee a bit sour. This is espresso with a lemon and lime, but the taste is very intense.
7. Coffee with vanilla coke Strange brew and certainly not healthy. It is a mixture of coca-cola, a dose of espresso, vanilla syrup and ice, which has a lot of fans. Clearly the combination of caffeine with caffeine is definitely not the best and it’s not for everyone, but there are some who prefer it fanatically.
8. Espresso and beer This is a combination that started with a shop with a coffee shop in Texas. The shop serves a cup of coffee with a glass of beer and encouraged to drink with any order he wants. Chances are, of course, that does not bring the best results to the agency if made in large quantities.