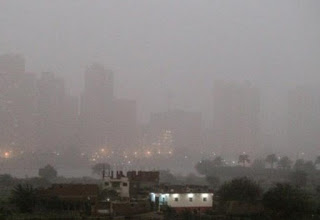 In 22 amount people who lost their lives today in Egypt…
in traffic due to the dense fog and very limited visibility, as announced by the authorities.
In a pile-up 24 car 16 people were killed and 21 injured near Beni Î£Î¿Ï…Î­Î¹Ï†, about 100 km. south of Cairo, a highway that connects the capital with the south of Egypt.
A further six people were killed and three were injured when a truck carrying workers collided with a train at a guarded crossing south of Cairo. Due to the dense fog, the driver of the truck didn’t see the closed barriers of the crossing, which broke and struck the train, according to police.