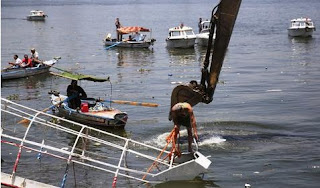 At least 14 people drowned in the Nile, north of Cairo, on the wreck of a ferry that was performing services without a license, reported today official sources…
The tragedy happened in the night, and the 14 bodies were recovered by rescue teams still seek survivors in the province of Kafr al-Sheikh, delivered the official news agency MENA, stating that the ferry is reportedly on board 17 people.
According to the governor of the province, Al-Sayyed ÎÎ±ÏƒÏ, the vessel was operating without a license and was not suitable to carry passengers.
Five months ago, 36 people had lost their lives in the collision of a freighter and a pleasure boat on the Nile, an accident after which the egyptian government had promised to restore “discipline” in the inland waters.
The authorities banned the loudspeakers in the vessels used for private celebrations and the ferries that carry passengers. Also decided not to build new moorings along the river.
The transportation accidents are frequent in Egypt and are attributed mainly to problems of maintenance and negligence.
The Nile, which flows through Egypt from north to south, receives cargo ships, fishing vessels and recreational craft.