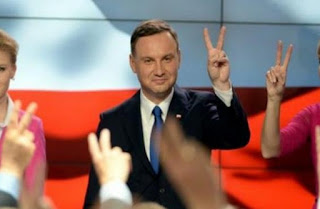 In focus a publication of the Economist is Poland, which is considered as one of the biggest “success stories” of Europe: From the entrance into E.E. the…
2004, the per capita GDP has doubled, so it would be prudent to consider that the Poles would sympathize with the european project. However, this does not seem to apply exactly, since he took reins of the new government of Poland, under the party “Law and Justice” (PiS), on 16 November, this relationship â€“ as reported by the Economist – shows be in danger.
The success of the PiS seems to be explained by the lack of popularity of the previous government, which led to ROE. “After eight years under the RO, many Poles were tired, the party was viewed as “ÎºÎ±ÏÎ¹ÎµÏÎ¯ÏƒÏ„Î¹ÎºÎ¿”, without objective and contact. But also broadened their horizons, â€œrunningâ€ a campaign that made it seem much more modest. Elders, farmers, voters, make up still the core of the support. But during the election he came first between the age group of 18-29 years. And since he won the elections in October with more than 37% of the votes, his popularity has increased. A recent poll shows the support of 42% of” mentioned in the article.
However, the Economist reports that since taking the PiS, they have abandoned all pretenses about moderation. The real power is in the hands of the prime minister, Beata Î¤ÏƒÎ¯Î½Ï„Î»Î¿, but in those of the Yaroslavl Kaczynski. Before the election, the Î¤ÏƒÎ¯Î½Ï„Î»Î¿ pledged that it will not give the ministry of Defence in the Antoni ÎœÎ±ÎºÎ¯ÏÎµÎ²Î¹Ï„Ï‚, one of the most extreme conspiracy theorists of the party – however the ÎœÎ±ÎºÎ¯ÏÎµÎ²Î¹Ï„Ï‚ (for a number of years a close associate of Kaczynski became minister of Defence.
The PiS and consolidates his control, and in other areas, stresses the Economist, by removing the heads of the intelligence and security services, and putting his own, frustrating the appointment of five constitutional judges (ideological opponents), defying a warning of a court that the act in question may be unconstitutional. The president Andrzej Duda gave thanks to Marius Kaminski, a friend of Kaczynski, who was sentenced to three years in prison for abuse of power when he was the head of service on corruption. Now, it has taken an even stronger position, that of coordinator of security services. The ministry of Culture tried to block a theatrical production with nudity, while sanctions were imposed on a reporter who pressed the minister on this decision.
Such developments inside creating concerns, but the government’s attitude towards Europe and foreign policy – says the Economist – look even more disturbing, the morning after the terrorist attacks in Paris, the minister for European Affairs, in an article very critical of the deal.E. the redistribution of refugees, calling it “dead”. The Î¤ÏƒÎ¯Î½Ï„Î»Î¿ doesn’t seem particularly in line with these plans, saying that he hopes that Europe will adopt a more “reasonable” approach to the immigration crisis. Also, the PiS is against the policies of the E.E. on the climate, with 85% of Polish electricity comes from coal plants, with the construction of more is in the plans.
The new government seems more concerned with domestic issues, as it is the economic policies “burn” more voters. How the social policies promised by the party will be financed is unclear, as the changes (to the top) that has been promised in pensions is costly, and the proposed taxes on banks and supermarkets will only cover part of the cost, according to the think-tank Polityka Insight. The budget deficit could reach 4% of GDP next year. Also, the population is ageing and many young people to leave for other eu countries.E., the reduction of the retirement age seems like a disastrous choice.
Many European diplomats in public, they seem to keep a reserved attitude towards the new government of Poland. “Talking in closed circles, others are concerned. The productive cooperation of Poland and Germany could fall for the migration, while the PiS could â€œtoughen upâ€ more with the passage of time, rather than be â€œtamedâ€. The only thing that is certain is that Europe has another “awkward/ weird” country face” concludes the Economist.
Source