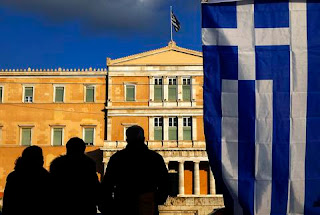 Greece is just around the corner of a new electoral process? According to an article in the Economist, yes, a response that occurs on the basis of three very specific reasons, which are “pointer” political unrest…
As mentioned on the article, the situation that has developed in Greece, with the delay of the completion of the second assessment and the new requirements put forward by the lenders, in conjunction with the pressures exerted on many european governments by both the right-wing extremist influences, as well as from many movements of eurosceptics, which increase their forces, create an explosive for Greece mix, as well as everything it asks for in return the Greek government, they pass through the approval of the european parliaments.
More specifically, the Economist mentions as the first reason for the inability of the government to pass the measures required for the completion of the second assessment. In the article referred to as “almost impossible”, as there are large reactions from the measures that have already been received, and the society is at its limits.
The second reason refers to the european governments, which receive large political pressure, in view of the elections that are coming, in order to give an end to the aid to Greece. A large percentage of citizens in Europe consider that they should not have given financial aid to Athens and that the Greek government should, above all, to proceed with the reforms that are required in order to reboot the economy through these and not through money coming from European taxpayers.
Third reason is the long-standing disagreement between the International Monetary Fund and European. The IMF still insists that the deal for Greece is not essential to charity, as well as the country’s debt is unsustainable. Europe doesn’t accept this, as in this case, you will need to proceed in a brave haircut, a process which is unlikely to be accepted by the parliaments and peoples of the Old Albion. Therefore, especially in the third part, there is the ultimate dead end.
The Economist makes reference to the declarations of Klaus Regling, on 30 January, which stressed that the second assessment of the Greek programme will have to be completed before the expiry of the deadline for the release of the european Ï€Î±ÎºÎ­Ï„Î¿Ï…Î½ support. At the same time you will need to have been accepted and the terms of the agreement by the IMF, which it is necessary to actively participate in the program
It is also noted, that the IMF considers to be out of touch with reality the target of 3.5% of the surplus, calling for adjustment of the objectives and adapting them to the data of the average of the European Union. As noted, Greece is in dire need of borrowing, as up to July 2017, is required to pay at least 6 billion. euro in debt obligations. At the same time, Finland, Germany and the Netherlands are leading the way in the reactions of the further borrowing of the Greek economy, followed by elections in the Netherlands, France, Germany and probably in Italy.