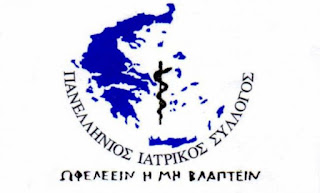 The Panhellenic Medical Association make efforts in order to… paid to contracted with EOPYY health care providers the overdue, up to 31/12/2011, which amounted to approximately 300 million euro.
The issue was raised by the President.I. P. mr Michael Î’Î»Î±ÏƒÏ„Î±ÏÎ¬ÎºÎ¿ to the Minister of Health mr. Andreas Blonde. Mr. Î’Î»Î±ÏƒÏ„Î±ÏÎ¬ÎºÎ¿Ï‚ stressed that we need to be a legislative adjustment in order to disbursed these amounts.
Over the five-year period there is a risk of limitation of the overdue debt, (end-of-year statute of limitation the arrears of 2010).
The CERTIFICATE has to sue within the deadline for the demand from the PUBLIC to the Î»Î·Î¾Î¹Ï€ÏÎ¿Î¸Î­ÏƒÎ¼Ï‰Î½ debts.
The hearing of the claim which was for the beginning of December has been postponed,
due to the strike of lawyers.
The Ministry of Health is asked to legislate the extension of the contracts of doctors with EOPYY, which expired on 30/6/2015. If you don’t become a legislative setting physicians will not be paid for services that they have provided the insured with EOPYY.
Meeting in the health ministry for the islands
In a meeting with the Minister of Health mr. Andreas Blonde and the Presidents of the Medical Associations of the islands will participate, today, Tuesday, the President of the E.I. P. mr Michael Î’Î»Î±ÏƒÏ„Î±ÏÎ¬ÎºÎ¿Ï‚. Subject of the meeting, the problems faced in the Care sector on the islands, and particularly those that receive refugees and migrants. The meeting is scheduled for 13.00.
The President of the E.I. P. I repeat to the Minister for Health the need of Legislative Regulation, both for the Î»Î·Î¾Î¹Ï€ÏÎ¿Î¸Î­ÏƒÎ¼ÎµÏ‚ debts, and the renewal of contracts of doctors with EOPYY.