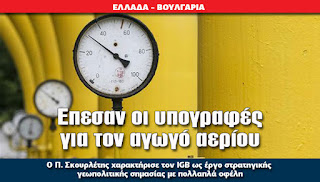 At the end of 2018 is planned to put into operation the…
greece-bulgaria pipeline transportation of natural gas (IGB), pointed out the minister of Environment and Energy, Panos Skourletis, and at the same time expressing optimism that it will soon solve the issue of the sustainability of the project so that construction can be started in accordance with the schedule in the second half of 2016.
Speaking today at the signing ceremony of the Final Investment Agreement of the involved companies in the pipeline , which took place in Sofia, mr. Skourletis featured the IGB as a project of strategic geopolitical importance with multiple benefits, as well as contribute to the achievement of the objectives of the European Union to increase energy security and energy market integration.
“Greece already is converted into an energy hub for the Balkans and that contribute to the two big projects of construction of gas pipelines, the TAP, and the INTERCONNECTOR â€“ who, after lengthy negotiations get in the way of implementation â€“ but the new terminal LNG (Liquefied Natural gas) in Alexandroupolis, which will be a new energy gateway, and will ensure new quantities of natural gas for the supply of the Greek and the regional market. The greece-bulgaria pipeline, added mr. Skourletis, will play a key role in the diversification of energy sources and the creation of alternative routes, through the Vertical corridor, for gas supply to the countries of South-eastern and Central Europe”.
The Consortium of the project involved the Poseidon, a joint company of DEPA and the Italian Edison with a rate of 50 % and the state energy company of Bulgaria, BEH, which controls the remaining 50 %. The capacity of the pipeline will be in the first phase, 3 billion. cubic metres of gas a year with prospect of increase then, and the amount of investment estimated at 240 million. euro. The IGB has been included in the list of projects of european interest. As to the sources of supply of the gas, the alternatives include Azerbaijan, through interconnection with the pipeline, liquefied natural gas from the existing station of Revythoussa, or the new one that is designed to Alexandroupolis, while information from the RIS report that has expressed interest, and by an american company to import shale gas (shale gas) that will be transported in liquefied form in our country, through this pipeline.
Source