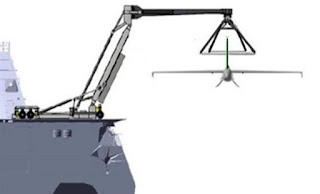 The naval vessels with small decks (helidecks), as destroyers… frigates would increase significantly their potential if they had their own unmanned aircraft, to provide information and to carry out reconnaissance/ surveillance and other related activities 24 hours 24 hours, over long distances.
However, today’s unmanned aircraft do not have the possibility of vertical off/landing from confined spaces in stormy seas, and to achieve long-lasting flights.
In this direction the work of the programme Tern, in which collaborate the DARPA of the u.s. Pentagon with the ONR (Office of Naval Research u.s. navy – and the program is progressing, with DARPA to award the third phase of the group of Northrop Grumman.
The first two phases had to do with preliminary design and reduce risk.
The third phase deals with a full-size display system â€“ a medium-altitude, long-endurance aircraft for use by vessels with small decks.
“The plan we have in mind… would significantly increase the effectiveness of the “parent” vessel, enhancing the perception, the scope and the Î´Î¹Î±ÏƒÏ…Î½Î´ÎµÏƒÎ¹Î¼ÏŒÏ„Î·Ï„Î¬”, reports on Dan, Pat, programme manager of DARPA.
It is considered that if the programme is successful it will open up great horizons for smaller units of area of the united states navy, and the Marine Corps of the united states.
The vision has to do with a vertically ejectable aircraft (design flying wing) with two oppositely rotating rotors in the nose, the Î±Ï€Î¿Î½Î·ÏŽÎ½Î¿Ï…Î½, will they bring it in a horizontal position and will move during the mission.
Returning, will assume the vertical Ï€ÏÎ¿ÏƒÎ½Î®Ï‰ÏƒÎ®. The boat will be stored on the boat when not in use.