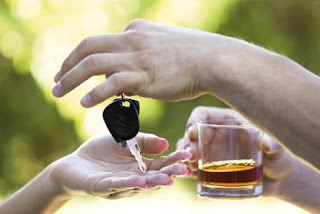 Attention to alcohol consumption recommends that the Greek Forensic Company, as well… as mentioned, the festive these days a number of drivers drifting and drinking an extra glass of alcohol with, many times with tragic results.
According to statistics, in Greece, road traffic accidents are the first cause of death in ages 19-39 years of age, while it is estimated that over 50% of fatal accidents due to the consumption of alcohol and other substances.
A driver is considered under the influence of alcohol when the percentage of alcohol in the body is 0.50 grams per liter of blood (after blood sampling) or above 0,25 milligrams per litre of exhaled air (in the well-known breathalyzer test traffic).
On the amount of alcohol that is able to get the above limit, the EPC indicate that consumption of 490ml beer (a large glass), 200 ml of wine, 60 ml ouzo, 55ml, whiskey or vodka “catch” to the limit. That is, the greater the content of a drink of alcohol so less quantity is sufficient to lead us to the legal limit. The Greek Forensic Company “hopes in these celebrations all the drivers to be more careful, especially as to alcohol consumption, so that all coroners to be useless”.