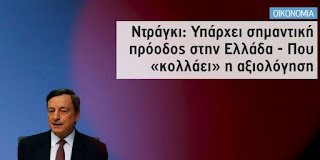 The view of the ECB that Greece has made significant progress, expressed by the president of the ECB Mario Draghi, speaking to the committee on economic and monetary affairs of the European Parliament in Brussels today…
In response to a question of the mep of the SOUTHWEST, George ÎšÏÏÏ„ÏƒÎ¿Ï…, the president of the ECB said that the points on which “hangs” the negotiation for the conclusion of the second evaluation is the following:
First of all, it is estimated that for there to be a positive assessment of the sustainability of the Greek debt would need to reach 3.5% of GDP primary surplus for quite a long period of time. Secondly, the M. Draghi said that the negotiation of “hang” in the coverage of the financial gap 2018, and in some structural reforms, including reforms in the labour market, to justice and energy. At the same time, the M. Draghi stressed that in the view of the ECB, it is important that the issue of management of non-performing loans.
In addition, the M. Draghi in response to a question of the mep of the KKE, P. Î–Î±ÏÎ¹Î±Î½ÏŒÏ€Î¿Ï…Î»Î¿Ï… stated that it is important to have measures for accelerating the absorption of the unemployed and that the kind of measures is negotiated for the completion of the second assessment.