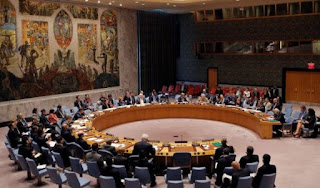 Draft resolution for sanctions on Syria, whose government…
he is accused of using chemical weapons, will come today to vote in the UN Security Council, according to diplomats.
Russia has warned that it will veto such a move. Moscow, an ally of the government of Bashar al-Assad, has already vetoed six times in favour of Damascus.
The draft resolution, promoted by the USA, Britain and France, would impose travel bans and freezing of assets against eleven Syrians, mainly military officers, and ten agencies. On the basis of the text will be prohibited in addition to the sale, supply or transfer to armed forces and the syrian government helicopters and other materials.
Preceded by a joint investigation carried out by the United Nations and the Organisation for the Prohibition of Chemical Weapons, which was reached last October at the conclusion that the syrian government launched at least three attacks with chemical weapons in 2014 and 2015 against the cities of Tel Dournerakia, ÎšÎ¼Î­Î½Î±Ï‚ and Î£Î±ÏÎ¼Î¯Î½.
The vote is scheduled for 18:30 cet.