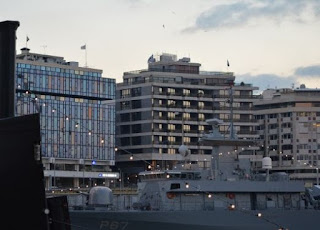 A lot of people as we wrote the other day went to the visiting hours of the… martial of the Navy, which took place on the platform 12 .
At the port of Piraeus have been the f/c ÎšÎ¿Ï…Î½Ï„Î¿Ï…ÏÎ¹Ï‰Ï„Î·Ï‚,DPF Î¡Î¿Ï…ÏƒÏƒÎ­Î½ and the newest Submarine in the fleet of us submarines Pipinos.The frigate left Sunday morning in order to drop anchor off the Naval Academy.
Unlike the other 2 ships of the NAVY ,remained in the port after they had visiting hours until 16.00.After the end of visiting hours and of a procession of a image of St. Nicholas and with a difference of about 30 minutes, the DPF Î¡Î¿Ï…ÏƒÏƒÎ­Î½ and YVES Pipinos departed from the port of Piraeus with direction to the Bay of Salamis.
The departure of the 2 units of our fleet you can see from the video below through the lens of pireaspiraeus.com