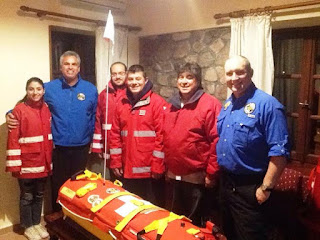 Team of American scientists from the University of A&M in the State of Texas visited…
recently the island of Lesvos, in order to donate a robotic system for rescue of shipwrecked people, with the name “EMILY”, at the Port of Mytilene and the Greek Red Cross.
This technological tool has the option of cruising at a speed of 40 miles per hour, and can directly approach people who are at risk of drowning.
The choice of Lesvos cannot be considered random, as this island, from the first moment of the event of the migration crisis, has received successive waves of refugees and migrants approaching the Greek shores, with boats from Turkey.
But the decision of the American scientists to choose the Greek Red Cross as a recipient of this valuable donation is justified by the fact that the E.E.P. responding actively to the many challenges of refugee and migration to the islands first host.
In particular, a large group of Samaritans, Rescuers & Lifeguards of the Greek Red Cross has been developed on the island of Mytilene from the beginning of September 2016, assisting refugees by setting them on the coast, distributing blankets and other material survival and providing first aid where required.