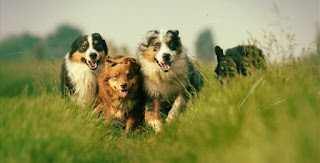 Dogs mimic expressions and transmit emotions between them, according to… study, Italian researchers from the University of Pisa.
The research team argues that the results indicate that dogs are capable of empathy.
Humans and other primates imitate the expressions of other individuals around them. For example, if one person smiles, another person in the group will do almost everything the same.
The mimetic behavior is part of what scientists call emotional contagion, where a person’s emotions, causing a change in the feelings of another, which in turn can manifest itself in a third person, and so on.
This phenomenon is not only for copying, but for a behavior that is causing a real change in the situation of the disposal of the other.
Another example is the game “hide-and-seek” with an infant, which generally result in the baby to laugh, which, in turn, causes a smile and sense of happiness in the adult. This behavior evolutionarily it is believed that it is a form of expression that allows members of a group to be linked.
The researchers tried to discover whether dogs engage in behaviors copying or and emotional transmission.
The group was installed at a local dog park and taped the interactions between 23 male and 26 female dogs, aged between three months and six years.
In the analysis of the video, scientists have discovered that the dogs had two basic behaviors of copying, to bend down using only the front legs, and open their mouths with a non-threatening way.
It was also observed that the dogs who knew each other better they tend to mimic each other more often.
As imitation was defined as copying an action or expression within a second.
76 percent of dogs were observed to behave in this way to some extent, and yes, the dogs imitated each other more tended also to play together most of the time.
The researchers argue that these results indicate that dogs feel empathy, as well as the transmission of emotions is an essential component of.