Do you know how and with what to wash their... 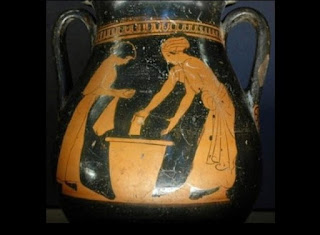 Washing (at home, in the river or in the sea)…
The multiple tasks of the woman belonged to the washing and grooming of Î¹ÎºÏÎ±ÏƒÎ¼Î¬Ï„Ï‰Î½ and clothing.
Washing was done as far as possible the sea or a nearby river, where for this purpose made especially dents or natural plants replaced the usual home ships laundry. which we recognize in the images of the blood vessels.
It is relatively rare depictions of women in the washing of the clothes, that have been delivered. One of the few shows that survived, comes from the hand of the well-known painter in the Diaper and is located on a red-figure Ï€ÎµÎ»Î¯ÎºÎ·. Rescued the moment in which two young women looked up from a large Ï€Î»Ï…ÏƒÏ„Î¹ÎºÏŒ container. The woman, who can be identified as a mistress, wrapped up in the robe like an apron around the lower part of her body and has snaps in front of her belly, to have more freedom of movement. What is holding up the opening of the container, it is not possible to determine. Opposite her stands a girl, who from the close of the hair can be recognised as a maid, and holding the garment which is to be cleaned. The clothes that on the basis of the characteristic shape can be recognized clearly as a kerchief.
Detergents in
According to Dioscorides, a Greek physician from the second half of the 1st century. m. X., for washing garments and fabrics used sapounochorto. From the plant, which belongs to the family of Î³Î±ÏÎ¹Ï†Î±Î»Î¿ÎµÎ¹Î´ÏŽÎ½, lay in the ÏƒÎ±Ï€Ï‰Î½Î¿ÏÏ‡Î¿ root (ÏƒÎ±Ï€Î¿Ï…Î½ÏŒÏÎ¹Î¶Î±). On the contrary, the Romans as a detergent medium were aware of the urine. The excreta, which were collected in bins, then only it was ready for use, when left to undergo a kind of fermentation. Then formed ammonium salt, which has a laxative effect, which increased with the addition of this fat, which suggested that soap. Also the raw potash and soda, had a cathartic power.
The use of ash from wood does not require a great deal of trouble. Î ÎµÏÎ¹Ï‡Ï…Î¼Î­Î½Î· with hot water to form a decoction, the liquor, into which they put the clothes and seethed. This simple method proved to be very practical and has been maintained until our times, as shown by examples not only from the modern Greece.
Perhaps the most famous example of a large wash (â€œÏ€Î»ÏÎ½ÎµÎ¹Î½â€) is located in the Odyssey, when Nausicaa, the daughter of the king of the Phaeacians, along with her friends goes to the sea to wash away. â€œThe big washing done in less time. Anyway this needed a whole day, starting from the morning. The clothes thrown in the laundry piece by piece. The natural power of water, constantly renewed. supported and. human power: The girls down in the pit of the laundry room (where they made a fun game) trampling the clothes. Detergent means I don’t use it When they were cleaning the pieces of the clothes with the movement of the water, that steadily washed away, and with the crushing and scrubbing of the girl’s legs, to dry, laid in a row upon the pebbles of the beach. The time needed for the clothes there in the sun, to dry. enough to the laundresses for a bath, meal and a game. Then followed the assembling of the washing machine. After returning the clothes were transported immediately to the houseâ€ . 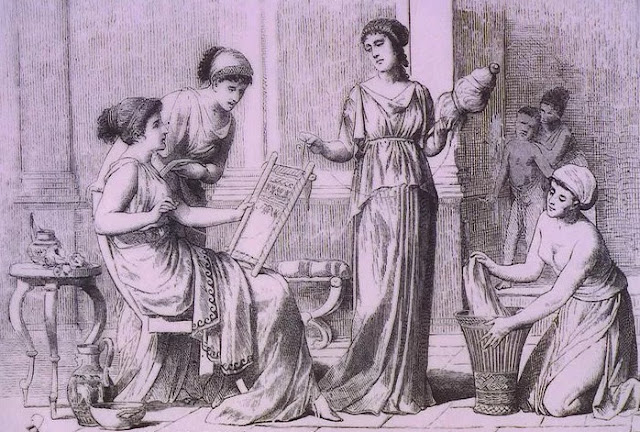 Lockers-clothing, control of harmful insects
At home they took care to keep the clothes in wooden chests (â€œarksâ€), as already mentioned Homer. The boxes with the clothes they were, or in the cellars or in the space of the residence. During the Î¼ÎµÎ¸Î¿Î¼Î·ÏÎ¹ÎºÎ® time it seems that the usual site, on the contrary, had become the ward of the women. The oldest performances come from the classical era. Up in a pycnometer, which is located in New Haven, a young woman holding a wrapped or folded cloth diaper from an opened chest.
The lid of minimalist furniture, which is decorated with just one star, is fired vertically. The decoration of the space is filled with a piece of furniture seat. On the wall is hung a mirror and a wreath or a headband. It is not possible to be recognised for what type of garment it is, ie. if this is a garment folded woven. The same problem faces anyone with some scenes skin or bath. The neatly folded garments. which have not been worn yet or have just been expelled, does not allow us to identify what species they belong. To prevent the ÏƒÎºÏ‰ÏÎ¿Ï†Î¬Î³Ï‰Î¼Î± and to equip the garments with fragrances, made sure to put in a ÎºÎ±Î»ÏŒÎºÎ»ÎµÎ¹ÏƒÏ„Î¿ chest various aromatic plants or fruits, such as apples and lemons. 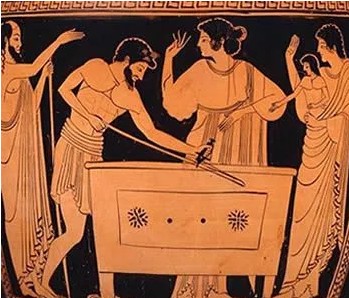 The boxes were used for storage of garments which were not used every day or stored for safekeeping. This storage of garments, which belonged to the movable property of the household, and whose wealth ÏƒÏ…Î³ÎºÎ±Î¸ÏŒÏÎ¹Î¶Îµ decisively, was under the special protection of the housewife of the house. And this is already mentioned appropriately in the homeric epics. End clothes â€œwas used in the diplomatic communication with guests, friends, enemies, gods, as bridal gifts, and in cases where the family appeared in public, the burial as funeral shrouds, and the Î³ÏŒÎ¼Î¿Ï…Ï‚ as bridal clothes, and clothes of the driver of the brideâ€. The important role is played always the possession of a garment, shown by the fact that the forensic reasons the garments are listed as part of the estate, and during the trials heritage the parties quarreled about them. Stealing clothes was one of the most often property crimes. Len missing besides the testimonials for garments as a means of payment or corruption.
The sources provide us with an idea of what treasures fabrics were kept in some houses. So in a speech of Demosthenes is a reference to the possession of clothing with a value of 1000 drachmas, a sum which at that time was a considerable fortune. In Athenaeus, we read that the welcoming Î¤ÎµÎ»Î»Î¯Î±Ï‚ from the West, had to accept 500 soldiers, who had come to Laugh, and at the same time had them supply you with the necessary winter clothing.From the book of Anastasia Î ÎµÎºÏÎ¯Î´Î¿Ï… â€“ Î“ÎºÎ¿ÏÎ­ÏƒÎºÎ¹Î½ “fashion in ancient Greece”Source