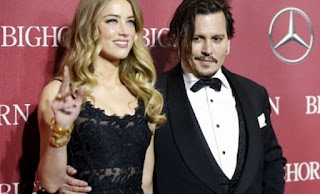 The stormy divorce of film star Johnny Depp from the actress Amber Heard was finalised last Friday, putting an end to the marriage of…
pair then of the categories of the Herd for domestic violence and those of Depp for economic blackmail.
The documents, filed yesterday in a court in Los Angeles, described in detail how you will split the assets acquired by the couple during the marriage, as well as the agreement on the basis of which the 53-year-old Depp will pay the amount of 7 million. a million dollars in the 30-year-old Hurd. The same has been told he will allocate this amount to charity.
The Herd filed for divorce in May, after 15 months of marriage, and a few days later asked court to impose interim measures at the expense of Depp, which were imposed.
The court argued that johnny Depp was abusing her throughout their marriage, culminating in a fight in May in which he threw in the face of a mobile phone and broke various objects in her apartment.
His lawyer, Depp had denied the allegations of ill-treatment and had argued that the Herd with these categories is “trying to ensure an early economic decision”.
“We are all pleased that this unpleasant chapter in the lives of mr. Depp and his family is behind them,” said Laura ÎŸÏ…Î¬ÏƒÎµÏ, a lawyer of Depp.
In the framework of the agreement for the divorce, the Herd has abandoned its request to continue the injunction against the Dep.
The divorce papers show that johnny Depp will remain the sole holder of numerous real estate, including properties in Los Angeles, Paris and a private island in the Bahamas. It will also keep more than 40 vehicles and vessels, among the antique cars and the collection of motorcycle.
The Hurd has said that he will distribute equally the amount of 7 million usd which you will get from the divorce between the American Civil Liberties Union (ACLU) and the Pediatric Hospital of the Î›Î¿Î½Ï‚ Angeles.
Source: ana-MPA