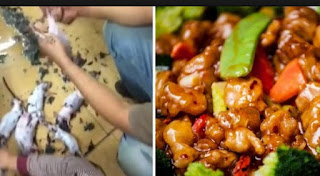 The only word that comes to mind to describe this video is â€œdisgustingâ€, because it really is…
We apologize for the spectacle, but some things you have to see it to know what’s going on around us. This shocking video, posted by the LeakEnt, shows cooks in a restaurant in China to be skinned and boiled rats.The video takes less than 1 minute, but it’s enough for you to understand this incredibly barbaric practice.
The cooks dipping the rats in hot water. They snatch a rat from a cage, dipping it in hot water and then remove their fur. Even when you can hear the poor creatures, writhing from the pain, the employees just talk to each other and laughing. This is really sick and inhumane. Then, scalped the poor animals, while he was still alive. This is really shocking. People need to be especially careful with what you eat, especially if you are located in China.
The video, originally posted on 10 December of the previous year. This video of 1 minute immediately became viral. Of course, internet users have expressed immediately the abhorrence and contempt. The video posted on several sites around the world in an effort to warn as many people as possible. The meat of rats served as a lamb in some Chinese restaurants.