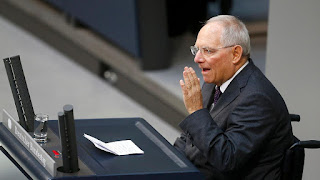 For the Greek crisis from 2010 until today he spoke of the well-known…
a journalist of the Financial Times, Peter Spiegel, in an interview on the show “Stories”.
Peter Spiegel watched everything that happened from 2010 to 2016, being a correspondent of the newspaper in Brussels. “The only one before me in the Greek drama, was the Years, and continues still,” he said yes, jokingly.
He explained that crucial moment when it considers the agreement Sarkozy-Merkel in the French resort of Deauville in October 2010. “What happened in Deauville, was that the Greek crisis turned into a european crisis,” he said.
When asked about the difference between Greece and the other countries that were in the program but have managed to recover, said the difference was the dysfunctions of the political system, that there has never been a cross-party agreement on the changes that needed to be done.
“Tsipras is responsible for a part of the problem, but I think Samaras has a share of the responsibility”, he said, although he blamed a share of responsibility in the Policy: “If you are an investor, bonds, and every 5 months, Schaeuble says “we might get to Grexit”, why invest in Greece?”.
Speaking of the difference Schaeuble-Merkel, said that “the Association wants to create a federal Europe and the Greece comes in the way of that. Merkel, I think it’s much more cynical. He sees the newspapers, and so he thinks about how it will move”.
The program doesn’t change, can’t change, said Peter Spiegel. “Venizelos figured it out basically within 24 hours, Samaras understood in a couple of weeks, Tsipras took six months. It’s definitely not democratic, but in the Eurozone today does not control the budget.”
Respondent, finally, for the outcome of the last Eurogroup, the Spiegel said that “The Eurogroup last week I interpret it as a victory of the Championships. The German Parliament will not vote for money to Greece without the IMF, for a very long time”.
As for the IMF, the reporter made a reason for internal conflicts in the organization: “The executives of the IMF are in a difficult position. They feel that the Europeans have lead to an embarrassing program. Their reputation has been damaged and there are a lot of people who just want to wash their hands and to leave the program. It is not surprising that it appeared the Î›Î±Î³ÎºÎ±ÏÎ½Ï„. I think he was afraid that if he double with Schaeuble, would convince her. So he sent Paul Thomsen, who is tougher to handle the New”.