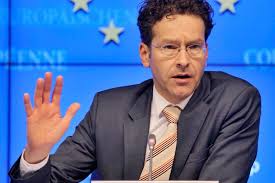 The time because of the insurance the farmers blockades threaten to cut off Greece…
parcels in the “cold” Davos, the prime minister had a series of contacts for the issue of debt, Jeroen Dijsselbloem puts again… ice in the hopes of Athens for debt relief after the first evaluation of the programme.
The president of the Eurogroup, through interview in the Wall Street journal made it clear that the options for lightening the Greek debt is two: or measures that will indicate the lenders now or measures in the… future!
The Dijsselbloem spoke of two options of the Eurozone for the relief of the Greek debt: to take measures to reduce the cost of servicing, when it will arrive in the future at a high level, or given promise of such measures in the future.
“One (option) is that I’ll just give a mutual pledge. They (p.p.: the Greeks) will promise their European partners that they will maintain the primary surplus, in other words to have a good budget. And we’ll promise that we’ll be ready to reduce these high levels (p.p.: in the service of the debt) in the future. This would really be a reasonable solution, because the first high level will be in 10 or 15 years and it is very difficult to predict the size of this,” said Jeroen Dijsselbloem.
“Alternatively, the Eurozone could try to calculate now the measures that would be required and to take immediate action to reduce the high levels of payments (debt service)”, he stressed and noted, also, that the size of debt relief will depend on the rate of growth of the Greek economy in the coming years.
But apart from that, the head of the Eurogroup urged Greece to implement reform of the pension, which he has promised, and to fill in the gaps in the budget, before the Euro-zone countries and the IMF begin the debate on the debt. Basically set as a prerequisite to start the discussion for the debt, the implementation of the new insurance.
And referring to the plan that has already been put in by the government to the lenders, said that the proposals of Athens to the pension fall short of the requirements of the lenders. “They have put on the table, a serious pension reform. The numbers don’t come yet”, he noted, something he had said earlier and on Bloomberg.
Source