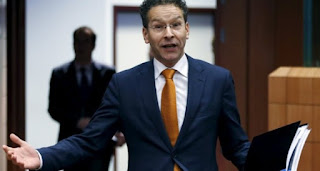 The Greek…
reforms take a long time, but going in the right direction, said the head of the Eurogroup Jeroen Dijsselbloem.
The height of the Greek primary surplus will be one of the topics of discussion during a scheduled meeting in Brussels later today, added Jeroen Dijsselbloem.
Speaking in the Hague, Dijsselbloem has confirmed that it will take place a meeting of key players in the rescue of Greece, but rejected the claim that the program of rescue of Greece is in crisis.
With the aim to be a solution to the impasse of the last few weeks, the Finance minister, Euclid Î¤ÏƒÎ±ÎºÎ±Î»ÏŽÏ„Î¿Ï‚, will have the Friday afternoon meeting with the heads of the institutions.
The meeting will take place in Brussels and, in accordance with information, was launched after the initiative of the head of the Eurogroup, Jeroen Dijsselbloem.
In addition to the Dutch minister of Finance, on the table will be found the Benoit ÎšÎµÏÎ­ of the European Central Bank, Pierre Moscovici of the european Commission, Klaus Î¡Î­Î³ÎºÎ»Î¹Î½Îº from the European Support Mechanism and the Pole vault, Thomsen, on behalf of the IMF.