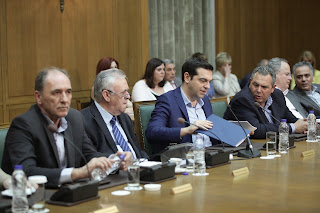 We are in the midst of summer, however it seems that at the Maximos Mansion.
holidays and working feverishly for the upcoming reshuffle, which is placed in time for October.
Looks like this will be root. Besides the prime minister, Alexis Tsipras, has long made it clear that both the ministers and their deputies are under constant examination and all are expected to be judged by their work.
The “unstable” chairs and the “activation” of Nikos Pappas
According to a report of a Pacemaker, has already started to be planned breaking of Ï…Ï€ÎµÏÏ…Ï€Î¿Ï…ÏÎ³ÎµÎ¯Ï‰Î½ which was considered dysfunctional by Alexis Tsipras.
Secondly, some ministers have already begun to feel the chair… it squeaks and is trying or through associates of the Prime minister, either directly with Alexis Tsipras to maintain their position by viewing it as an excuse that they have work to complete.
The minister of State, Nikos Pappas, it appears that he is losing the power on the Media, while allegedly claiming productive ministry and specifically the ministry of Development, in order to show his skills, which he considers to be untapped as a consequence of engaging with the MEDIA.
Silence is a Two – Developments in the conference
The prime minister, in accordance with that publication, he hasn’t said anything to anyone for the reformation, nor even to his close associates. Reportedly, however, accept proposals, and for “breaking” ministries and the creation of two new (one is probably for the Refugee).
Of course, we must not pass unnoticed the fact of the change of the followed policy, the prime minister expressed at the party congress, which will also be placed in time for autumn.
In this important role you will play in the stand that will hold the executives of SYRIZA at the conference and in particular the group of “53” of the ÎµÏƒÏ‰ÎºÎ¿Î¼Î¼Î±Ï„Î¹ÎºÎ®Ï‚ opposition. Those already required by the decisions relating to the work of government to be taken jointly with the party.
Insecure ministers
Olga Î“ÎµÏÎ¿Î²Î±ÏƒÎ¯Î»Î· wanted to be moved to either the ministry of the Interior, or the ministry of Health, however, remains in position with increased responsibilities.
Euclid Î¤ÏƒÎ±ÎºÎ±Î»ÏŽÏ„Î¿Ï‚ had expressed the ÎµÏ€Î¹Ï…Î¼Î¯Î± to resign from the ministry of Finance (not wish the “impact” of the management of the memorandum) and is being prepared as a replacement of the George Î§Î¿Ï…Î»Î¹Î±ÏÎ¬ÎºÎ·Ï‚.
Suspense if they will keep their ministry is expressed by three ministers:
– The minister of Health, Andreas Blonde (which feels completely absorbed by the “explosive” deputy Paul Î Î¿Î»Î¬ÎºÎ·)
– The minister of the Interior, Panagiotis ÎšÎ¿Ï…ÏÎ¿Ï…Î¼Ï€Î»Î® (due to the proposals made to the electoral law, and were not accepted)
– The minister of Economy, Giorgos Stathakis (if not moved to another ministry will sit home)
– The minister of Justice, Nico Î Î±ÏÎ±ÏƒÎºÎµÏ…ÏŒÏ€Î¿Ï…Î»Î¿
The “questions” and the “not sure”
Mystery still surrounds the intentions of Alexis Tsipras on the ministers of Marine and Foreign affairs, mr. Dritsas and Kotzias, respectively, while firm in their positions, allegedly, the deputy minister of Citizen Protection, Nikos Î¤ÏŒÏƒÎºÎ±Ï‚ and the minister of State, Alekos Î¦Î»Î±Î¼Ï€Î¿Ï…ÏÎ¬ÏÎ·Ï‚.
However, it is expected a large… slaughter to deputy ministers and secretaries of state…