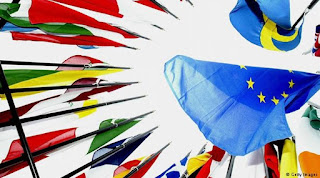 What will bring the 2016 on the old continent? According to Deutsche Welle, in Europe, we will… bring more immigrants and refugees , in Greece, the economic crisis will remain a hot topic on the “agenda” with their creditors to appear cautiously optimistic that the country will implement the reforms to which it has committed while in NATO, the member countries will coordinate the strategy of defence towards the country of Vladimir Putin.
In Russia, they will set up ballot boxes in the Autumn, the subversive political formations will join forces in an attempt to put in the margin, the strong man of Russia. The outcome of the Russian elections will attract the interest of Europeans. With the Ukrainian and syrian crisis to be put on the table, Europe’s leaders will try through diplomatic means to find a solution by asking Moscow to take an active role .At the same time, the scientific community has looked to the Red Planet with Russia and Europe to participate in a joint space mission. But football fans will not be disappointed as their wait for the Champions League.
Refugee
According to Deutsche Welle, the refugee issue will remain on top and in 2016, a big challenge for the old continent. How it will be distributed to the refugees in european states? How they will be integrated in the societies? And how would that happen in a Europe where the far-right gaining ground? A lot of questions for the European Union, which will attempt to answer the Netherlands and Slovakia, which will take over the presidency of the Council of the European Union, the first and second half of the year, respectively.
Greek crisis
The economic situation in Greece will remain and 2016 in the centre of european interest. The government Tsipras has promised or has already implemented many of the reforms, while the creditors are cautiously optimistic for the year coming.
Ukraine, Syria, NATO
The Ukrainian crisis will remain at the top of the agenda of the leaders , mainly of the officials of NATO , as well as the raging crisis, mainly in the area around the Donbass , in the east of the country.
In Warsaw, Poland, on 8 and 9 July, is expected to meet representatives of the NATO to coordinate the strategy of defence against Moscow.
Planet Mars
In March,the scientific community has looked on the Red Planet. Then launch the Russian-european mission to the planet Mars with the launch of an unmanned spacecraft. The spacecraft “Trace Gas Orbiter” will be launched from the space station of Kazakhstan with the purpose to explore the atmosphere of the Red Planet.
European Football Championship
On 24 June, football fans will be waiting with bated breath to watch 24 teams battling in France for the title of champion of Europe with the theme of safety emerges as a top priority for the host country. The final will take place at the “Stade de France”, where the islamic terrorists spread terror and death. France and Germany are among the favorites.