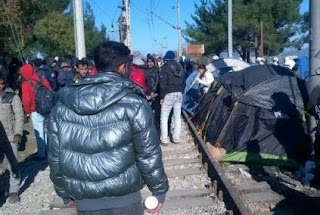 The Danish government passed a law under which the government will… proceeds to the seizure of any object of value that they have with them the refugees who enter the country in order to “cover part of the costs” of their host, transmit the national television network of Sweden’s STV.
Under the new legislation, the police of Denmark have the right to perform audits on personal property they have with them the refugees and to make seizures.
The refugees will be allowed to bring with them to about 440 dollars in cash, a mobile phone, a portable computer, a watch and other “personal items”, among them any wedding rings. All the other valuables or any items of high value of the refugees will be seized, as she Russian news agency Sputnik.
According to the newspaper Politiken, the law â€“which allows refugees to enter the following in the country, having with them only the absolutely necessary personal itemsâ€“ was supported by several parties of the coalition government.
“Unacceptable to be paid for by the Danish taxpayers and asylum seekers to transfer wealth”
“It is unacceptable for the Danish taxpayers to pay for asylum seekers that carry with them wealth,” said Nasser Canter, commissioner of immigration of the Conservative Party.
Last week the minister for Justice and Migration in the Danish Î£ÎµÏÎ¬Î½Ï„ Pied defended speaking on a television broadcast of the state television of Denmark the government’s choice, claiming that “the revenues raised will be used to cover the cost of the refugees”.
The Pied explained that wedding rings and engagement, watches and mobile phones will not be removed, but all objects with a value in excess of eur 300 will be seized by the authorities.
While this law has provoked strong criticism both in Denmark and in Sweden, the police authorities are trying to clarify the way of application.
The previous month the prime minister Lars Î›ÏŒÎºÎµ Rasmussen warned that the Copenhagen sees there is an end to the wave of refugees and migrants who flock to the scandinavian countries, and plans to harden immigration policy.
In October the Danish government published advertisements in four newspapers of Lebanon,warning the would-be refugees that it is taking measures to cut the allowances of asylum seekers in the country.
The Liberal Party won the elections in June based on a policy against the refugees.
As imparted the news agency Ritzau, last Friday the Danish parliament voted a series of measures to limit the refugee flow in the country, on the basis of which providers of transport services is obliged to check the documents of those who wish to enter the country, otherwise it will be imposed a fine of 1,700 euros per passenger who enters the country without the necessary documents.
According to the agency, the minister of Integration Inga Î£Ï„ÏŒÎ¹Î¼Ï€ÎµÏÎ³Îº refused to clarify “exceptional circumstances” that Ï€ÏÎ¿Ï‹Ï€Î¿Ï„Î¯Î¸ÎµÎ½Ï„Î±Î¹ for the conduct of audits, while the Danish railways DSBÎµÎ¾Î­Ï†ÏÎ±ÏƒÎµ the protest, arguing that you don’t have the appropriate equipment to conduct id checks.
According to the immigration service of Denmark, the number of asylum seekers in the country has doubled Ï„Î¿2014 compared with 2013, from 7.557 in 14.815. From the 14.815 applications were approved less than half, i.e. 6.110. The two largest groups of asylum seekers in 2015, were nationals of Syria and Eritrea.
According to officials, the recent flows of refugees in the country have been give the opportunity to the gangs in Denmark to earn large sums of money from illegal activities, namely providing facilities to the refugees in order to travel in Europe. The police of Denmark has carried out raids, arresting suspects for trafficking in human beings.
Source