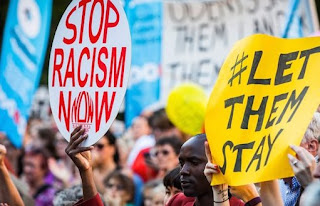 Thousands of Australians have participated in demonstrations to welcome the refugees and to stand their ground …
in the face of right-wing voices that are rising in the country.
More than 20,000 people, including politicians, took part in the demonstrations held in 25 cities throughout Australia, said Mohammad al Î§Î±Ï†Î¬Ï„Î¶Î¹ head of the organisation Welcome to Australia.
“Events like this are very important, especially when (…) thousands of people out on the streets to welcome the refugees and asylum seekers,” said al Î§Î±Ï†Î¬Ï„Î¶Î¹.
Refugees in Australia “feel marginalized, that is in the crosshairs of right-wing, radical movements. I just don’t Î¸Î­Î»ÏŒÏ…Î½ to participate because they are afraid for their lives,” he explained.
Australia has a troubled past with the ethnic diversity.
By the end of the 1960s was a policy, on the basis of which were very popular with the immigrants from Europe compared to non-whites. At the same time until that time the Aborigines were not considered citizens of Australia, according to the law, and not Ï€ÏÎ¿ÏƒÎ¼ÎµÏ„ÏÎ¿ÏÎ½Ï„Î±Î½ in the census of the population.
Because of this policy, the Aborigines remain far behind the rest of the Australians on matters of health, economy and education.
In the past few months has intensified the rhetoric against the refugees, mostly from right-wing extremist organisations and right-wing extremist parties, which until recently were considered marginal, such as the party One nation of Pauline Hanson.
The fear of attacks by jihadists has also enhance the penetration of the extreme right in public opinion, although in the country there is no record of such attacks.
At the same time organisations for the defence of human rights strongly criticize the immigration policy of Australia, after allegations of abuse, even sexual attacks against women and children, in detention centres.
Source