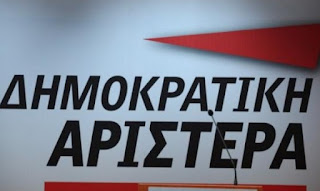 The President of the Democratic Left Thanasis Î˜ÎµÎ¿Ï‡Î±ÏÏŒÏ€Î¿Ï…Î»Î¿Ï‚, met today, January 27th, with the President of New Democracy Kyriakos Mitsotakis at the office of the President of the New Republic in the House…
At the beginning of the meeting was the following dialogue:
Th. Î˜ÎµÎ¿Ï‡Î±ÏÏŒÏ€Î¿Ï…Î»Î¿Ï‚: “Good power and close, so, in the new authority as President of the New Republic.
It’s so tough times and critical times in which we live, which required a broader understanding of the political forces. And this regardless of the actual programmatic, ideological positions and differences of the political parties that exist.
Feature issue is the current trend with the refugee. And we, as unwaveringly pro-european, I want to stress that we believe that it is a crucial issue for the European Union. Rattle the foundations of the european edifice. And should be tackled at european level. And, of course, and our country will have to cope with. To be able to quickly cope with all the commitments it has taken. Because it requires a longer Schengen and not less Schengen. And we need to ensure what we have achieved as a country.
Therefore, any thought of sounds for the issues in relation to on the eve of the country in Schengen, from various countries of the European Union, should be addressed with serious policy.
And, of course, to the critical issues of the insurance – which we saw yesterday in the Greek Parliament – required a brave reform and no changes, they do not constitute a reform, but simply shift the problems on to the next generations and the next Governments.
I think the issues is critical. And the debate between the parties is very useful for these issues”.
Kyriakos Mitsotakis: “thank you for your good wishes, for your kind words.
In fact, I’m taking over the leadership of the New Republic in an extremely critical juncture for the country.
We had the opportunity yesterday, in a live â€“believe – discussion in the National Parliament, to discuss the question of the insurance, to suggest alternative approaches to an issue which, unfortunately, has divided the Greek society. I’m afraid it is the fault of the Government.
It is my duty, as leader of the opposition, is to seek, and to seek always for the widest possible consensus. That is why I will always encourage the dialogue between the political forces.
The problems facing the country are very serious. The refugee – immigration is an issue, which I’m afraid that will occupy us very, very strongly in the next few weeks. I’m worried especially for the information, which come to us on developments concerning the position of Greece in the Schengen area. It would be devastating, not only for our country, but overall for European integration.
We, as the New Republic, will undertake a series of initiatives to support the position of our country. Because this issue has a national dimension. And on this issue I don’t fit Î¼Î¹ÎºÏÎ¿ÎºÎ¿Î¼Î¼Î±Ï„Î¹ÎºÎ­Ï‚ expediency. Already, I have asked and will I be informed by the Secretary of state migration policy of the tsp. ÎœÎ¿Ï…Î¶Î¬Î»Î±, on how the government intends to meet the commitments it has undertaken.
There is no doubt that the last thing he needs today our country is to give the handle in various malicious, by not being consistent in what he said he would do. And I think that this is an issue on which there is common ground among all the political forces.
And again, thank you for your presence here today.
I look forward to a continuous and honest dialogue. Despite our differences, there are issues on which we can surely agree”.