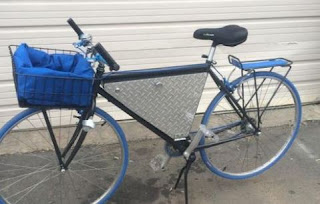 The members of the collective, Room 39, of Social Centre/Shelter Immigrant…
in Thessaloniki, handing out with their bicycles food to the homeless of the city.
“We purchase cooked food and pastries from various restaurants and bakeries that support our efforts and distribute them to people who have identified that they find temporary shelter in various places,” says the Athens-Macedonian News Agency, Christos Georgiades, a volunteer of collegiality, adding that handing out daily about 30 servings of food.
Of course, as noted, most homeless people are supplied with a lunch from church or from various other collectives or ordinary citizens. “The need for food is not as great as the housing, since the existing structures in Thessaloniki are complete and are not sufficient to meet the needs,” he says.
At the same time, at the headquarters of the Social Centre/Shelter Immigrants Ermou 23) every Saturday and Sunday noon organized kitchen of solidarity where offered a free meal to disadvantaged. In addition, the volunteers of Room 39 are active and in Eidomeni with the collection and distribution of food, basic necessities and clothing to refugees
As to why he was baptized with the name of the collectivity, Christos Georgiades explains: “The Social Centre is housed in the building that functioned formerly as a hotel and in which he had left in fact, and Grigoris Lambrakis before the assassination. To us has been granted a space that was formerly room 39 and so we decided to “go out” with this name”.