D. Papadimoulis: to get used To. Mitsotakis that elections will... 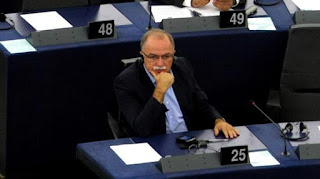 “It is unreasonable to ask for someone’s measures, after the end of the programme, to close the Î²Î±Î¾Î¹Î¿Î»ÏŒÎ³Î·ÏƒÎ·” he said on the radio…
station of the Athenian/ Macedonian News Agency “Agency 104,9 Fm”, the vice-president of the European Parliament and mep of SYRIZA, Dimitris Papadimoulis and ruled out new measures. He underlined that the evaluation will be closed as the majority of the lenders understands that this is in the interest of all.
Asked about the pressures of the lenders, mr Papadimoulis said “Agency 104,9 Fm” that there are difficulties and this was also reflected by the measures of the government for pensioners and the islands. He stressed, however, that 77 of the 80 prerequisites have already been closed, and the differences that remain between the two sides is remarkable, but can be bridged.
On the occasion of Press reports, mr Papadimoulis said that “the scenarios of destabilization have not been luck, ( … ) those who want the script of the short left parenthesis give the change in ÎºÎ±ÏƒÏƒÎ±Î½Î´ÏÎ¹ÎºÎ­Ï‚ forecasts”.
“To get used to. Mitsotakis that elections will be in 2019”, said mr Papadimoulis, and invited their colleagues of the leader of the opposition to inform him that the elections will not be a walk in the park.
The vice-president of the European Parliament, stressed that the government at this moment is the hardest time of wear and tear, as well as have not seen, in the households, the positive aspects of the policy that follows. However, estimated that the time works in favour of the prospects of the Greek economy and the possibility of the Greek government to show work.
Mr Papadimoulis in the shadow of the new terrorist attack in Istanbul , noted that “in 2017 with the launch, confirms that internationally it will be a years of instability in Europe with back to back elections in Turkey with the terrorist attacks, but even with the election of a Trump”. Fill out, however, that “for Greece, there are all the conditions to be a year better than the last. There are many signs of a return to positive growth in the economy”. Set as a condition to enhance the comparative advantage of our country’s stability and democratic normality.
Source